Just over half of California’s registered voters have considered leaving the state, with soaring housing costs cited as the most common reason for wanting to move, according to a new poll.

Young voters were especially likely to cite unaffordable housing as a reason for leaving, according to the latest UC Berkeley Institute of Governmental Studies poll conducted for the Los Angeles Times. But a different group, conservatives, also frequently suggested they wanted to leave — and for a very different reason: They feel alienated from the state’s political culture. 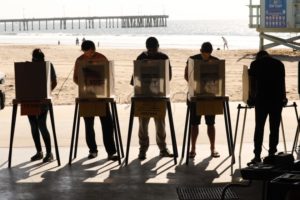 Republicans and conservative voters were nearly three times as likely to have seriously considered moving as their Democratic or liberal counterparts — 40% compared with 14%, the poll found. The conservative voters mentioned taxes and California’s political climate as a reason for leaving more frequently than they cited housing.

“If the people who are giving serious consideration for leaving are indeed going to follow through, the state will continue to get bluer and bluer,” said Mark DiCamillo, the director of the Berkeley IGS Poll. “That has huge political implications.”

The findings come amid the slowest population growth in California history — underscoring shifting immigration patterns, declining birthrates, and the economic strains that make it harder for some to afford living here.

One in five Californians pay more than 50% of their income for housing, according to the state Department of Finance.

In Southern California, the six-county region’s median home price was $535,000 last month, unchanged from August 2018, according to a report released Wednesday from real estate data provider CoreLogic. The Los Angeles County median price rose slightly to $619,000. The median price in the nine-county Bay Area region was $810,000.

The state’s fiscal year budget — the largest in California history — includes a $1.75-billion package to increase housing supply, featuring planning and infrastructure grants to local governments, an investment in the state’s housing loan program and an expanded housing tax credit program, among other initiatives.

“That’s huge,” DiCamillo said. “Those 65 and older probably bought a house many years ago and it’s not that big of a deal. It’s less of a factor for the seniors.”

Younger people have a much higher likelihood of moving out of state than others, said USC demographer Dowell Myers.

“People in their 20s and 30s who are also citing a housing problem, we have to take them a little more seriously,” Myers said. “At least relative to the other age groups, those are the ones you have to worry about.”

The poll suggests some “real threats” to California should those voters actually leave, he said. “That impacts the young workforce. The old folks are growing in number, and you can’t have the young folks shrinking in number.”

Jessica Millan Patterson, chairwoman of the California Republican Party, said the findings of her party’s members didn’t surprise her, listing reasons they might consider leaving: “Our failing K-12 education. Our affordability crisis. Not being able to buy a home. The homeless epidemic.” Those problems, she said, are a direct result of the Democratic leadership in California.

William Frey, author of “Diversity Explosion: How New Racial Demographics are Remaking America,” said California has had a consistent pattern of people leaving the state for other parts of the country. The exodus has been mitigated through immigration, he said.

About 5 million people moved here from other states from 2007 to 2016, while about 6 million left California, according to the U.S. Census Bureau.

“In general, California is a wonderful place to live. A lot of people think so. But it’s expensive — especially coastal California,” Frey said. “It doesn’t surprise me that young people want to leave California…. It’s typically young people who want to buy a house, and they’re not able to do it.”

Still, Frey said, he was surprised by the potential political side of migration.

“Migration goes in two directions: People leave and people move in,” Frey said. “It could be that people moving to California also have political reasons for it. Maybe they move to California rather than a state that isn’t as progressive or doesn’t have as big of a social safety net.”

He added that if conservative voters do move out of state, California could lose a large tax base.

“I’m not surprised that some people will leave for economic reasons,” he said. “But to move on the basis of political preference, to leave the whole state, seems kind of dramatic.”

The poll surveyed a random sample of 4,527 of the state’s registered voters from Sept. 13 to 18. It was conducted online in English and Spanish.