Articles
ExitCalifornia.org / Nevada / The California Dream Is In Nevada
Mar 01 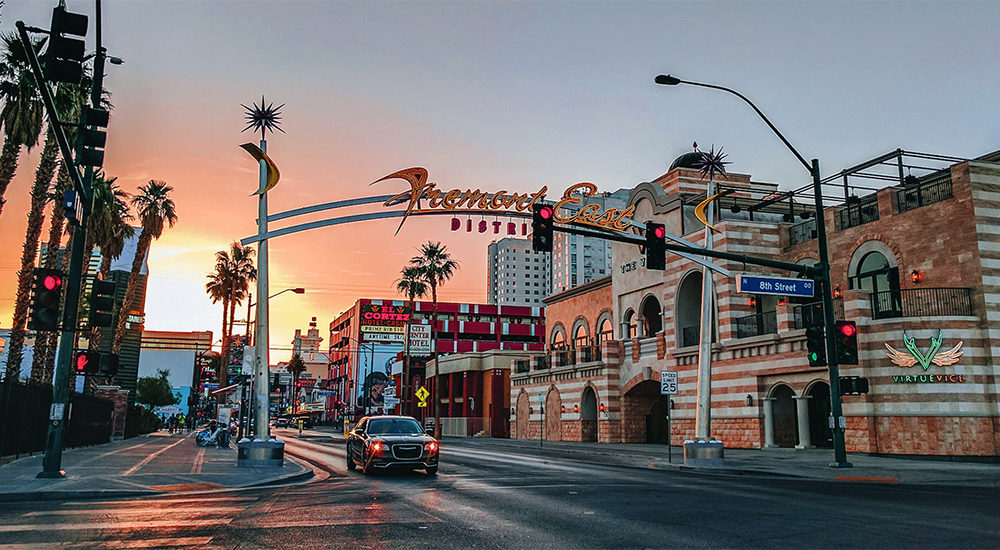 The California Dream Is In Nevada

This article originally appeared on ZeroHedge.com

It’s no secret that California residents, particularly people residing in the most expensive parts of the state (SoCal, the Bay Area) are fleeing in droves, displaced by expensive rents, sky-high home prices, unbearable traffic congestion and – oh yeah – increasingly deadly wildfires. As a result, California expat communities have sprung up in Texas, Arizona, Idaho and Nevada, sun-belt states where residents can enjoy many of the benefits of California living (namely, the agreeable climate and booming economy) without the downsides.

But in some of the most desirable communities, the influx of Californians has grown into a flood that is straining public resources – residents complain of crowded class sizes and home prices, while still lower on an absolute basis, are seeing some of the fastest increases in the country.

One such community is Henderson, Nev., a suburb of Las Vegas where the Oakland Raiders recently started construction on a new practice facility in preparation for their move to Las Vegas. As the Wall Street Journal reported, Henderson has become a place where California expats can enjoy a better standard of living (and even have some money left over after paying their mortgage) while spending less time sitting in SoCal’s notoriously brutal traffic. Just ask John Falkenthal, a software engineer from San Diego, who sold his home in SD and moved to Henderson a year ago.

“I never even considered leaving Southern California, but it took me every dime I had to buy a home there,” said the 54-year-old Mr. Falkenthal, a software engineer who moved to Henderson from San Diego last October.

Mr. Falkenthal initially looked for a house in San Diego after selling his former home following a divorce three years ago. But his half of the proceeds, about $250,000, would have paid for only a small townhouse or condo in the coastal area where he lived, he said.

Instead, he bought a three-bedroom, two-story house in Henderson in October for $416,000.

“My quality of life went up the day I moved here,” said Mr. Falkenthal pointing to his pool table and his musical equipment.

And that’s before taxes and insanely high utilities prices (which, thanks to PG&E’s bankruptcy, might climb for some residents). One Cali expat who spoke to WSJ says he saved $5,000 on his water bill alone in a year.

Net migration out of California topped 100,000 in 2015, 2016 and 2017, according to the Census Bureau. And between 2006 and 2017, a total of 1.24 million Californians left the state, never to return, the third highest total in the country, behind only New York and Illinois. That should hardly come as a surprise in a state where buying a home is only affordable for 28% of the population, as the median home prices nearly doubled between 2012 and 2018. As more residents struggle to get away, new births and immigrants from abroad (including plenty of illegal aliens) are the only reason California’s population has continued to expand. 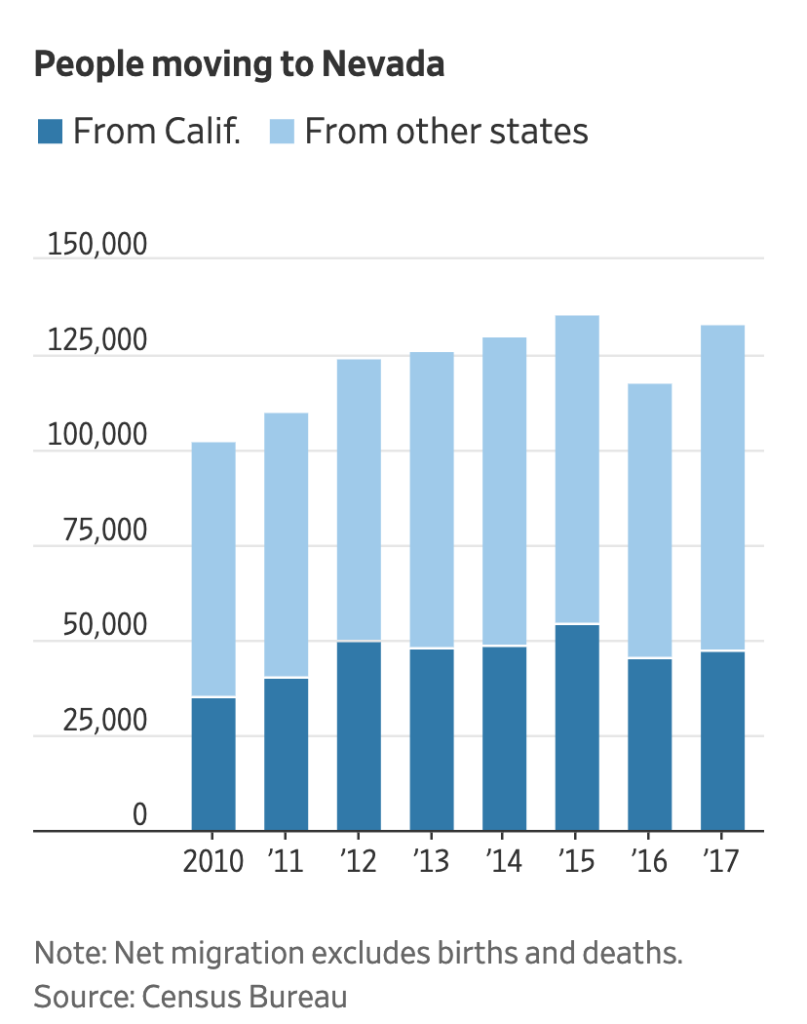 Las Vegas, and the surrounding area, has emerged as one of the most popular destinations for these expats. 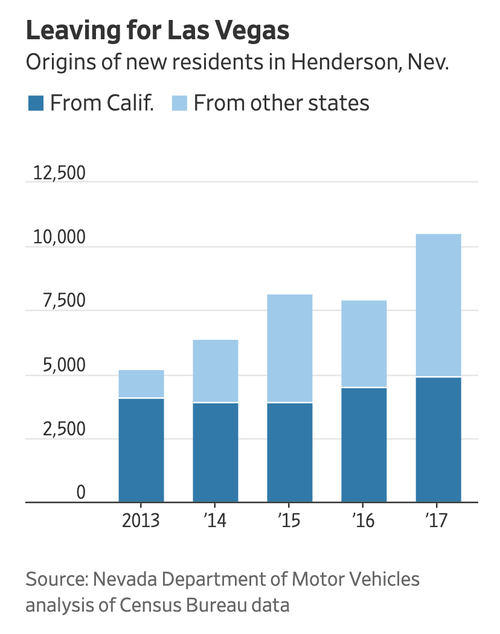 More than half of new arrivals in Henderson – some 56% – between 2013 and 2017 were from California. In some of the ritzier areas, including new luxury developments, as many as 70% of the residents hailed from the Golden State. 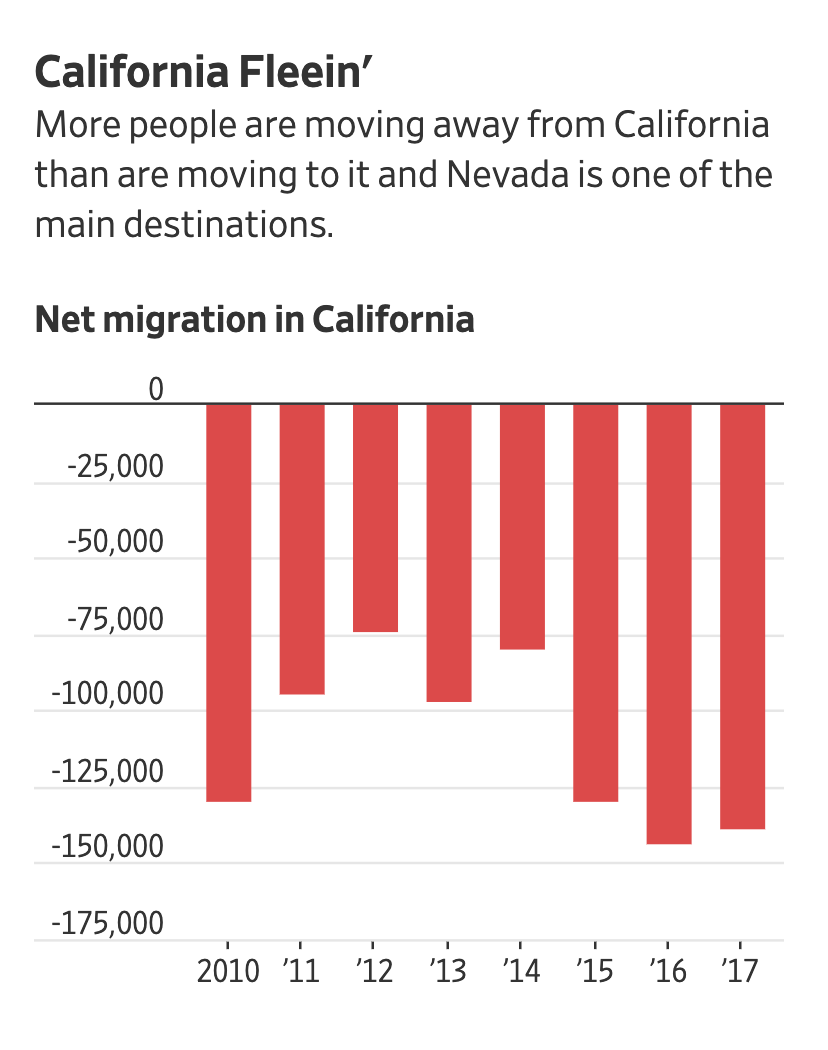 Many retirees have chosen to settle down in Nevada, instead of California, where they also enjoy being relatively close to their grandchildren. Bill and Cindy Clune, told WSJ that financial considerations were a big part of their decision to move.

Mr. Clune, 62 years old, and his wife Cindy, 63, both retirees, persuaded their daughter and cousin, along with two other couples, to follow them to Henderson after they moved here three years ago. In addition to saving money, escaping the California traffic was a big draw. Mr. Clune said he used to spend as much as two hours each way commuting from his home in Temecula to his manufacturing business in North Hollywood.

“Here, they complain if you have to spend 30 minutes in traffic,” Mr. Clune said.

There are things he and his wife miss in California, though. “We have four grandkids there, and would love to see them more often,” he said. “And the beach is nice.”

Pretty soon, retirees like the Clune might find their family members coming to stay with them instead of the other way around. Because, according to one recent survey, more than half of California’s 40 million residents wish they could escape from their own personal California nightmare.