Surprising top state for Californians who leave: It’s red and in the South

What may surprise some people is that an overwhelming number of those fleeing California are heading to Texas, which accounted for close to 300,000 of the departures. Why do so many people leave for the Lone Star state? According to the study, cost of living appears to be a major factor since “families with kids and those with only a high school education predominate among those moving from California to its top destination states.” 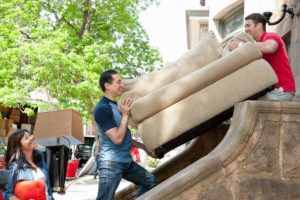 The three other top destination states are California’s neighbors Arizona, Nevada and Oregon

Beyond the expense of living in California, there may be other factors for the move to Texas. When SFGATE interviewed some Bay Area natives for its “Grass Is Greener” series, Suzanne Kovach, who left for Texas after 61 years living here, gave three big reasons for moving away: “Crime, traffic, economy.”

Everyone knows Austin, Texas is cheaper than San Francisco. It’s a key reason lots of Bay Area residents are packing up and moving to the Lone Star State. But just how much cheaper is it? SFGATE compared prices in both cities.

Kovach goes on to describe her Texas experience in overwhelmingly positive terms:

“I’m living in a house twice the size at a quarter of the cost. No daily gunfire. No daily traffic nightmares. People are friendlier and pace is more relaxed. Sense of community. I’m not the only former Californian here. I have met a bunch of others who feel the same sense of relief.”

On the report’s flip side are those coming to California from elsewhere. The top state for people migrating here is New York, but the numbers, between 50,000 and 100,000, pale compared to the number moving away to Texas.

Also, while California had a net loss of people, “it has gained among those with higher incomes ($110,000 per year or more) and higher levels of education (graduate degrees).”

To find out what state is best for you, call 866-7EXITCA or go to www.ExitCalifornia.Org
This article originally appeared on SFGATE